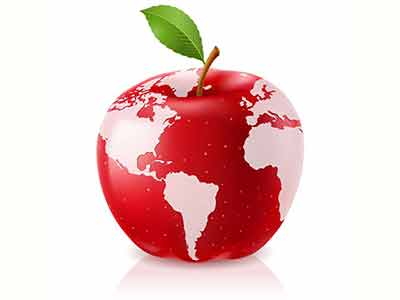 Are you ready for a bumper crop of apples? I know that is an odd question; unless you farm apples, you really wouldn’t need to be ready for the apple harvest. But, of course, I am not speaking of the type of fruit from which we make apple pie. I am speaking of spiritual fruit.

The Fruit of the Spirit is love, joy, peace, patience, kindness, goodness, faithfulness, gentleness, and self-control. Years ago, a prophetic mentor, Bob Jones, taught us that each of the nine qualities of spiritual fruit can represented by a fruit or vegetable. I believe he taught us this to increase our spiritual vocabulary in case the Lord wanted to speak to us about a particular quality of the Fruit of the Spirit. If the Lord is throwing apples at you in visions and dreams, it is good to know that apples represent peace in such communications.*

Another way in which the Lord might speak to you about peace, is asking if you are a Johnny Appleseed. We all know the stories about John Chapman, a man who planted apple orchards as he travelled about the northeast and midwest, and became so identified with planting apple trees that we know him as Johnny Appleseed. A spiritual Johnny Appleseed would be someone who focuses on peace, and raising up congregations of those who also focus on peace.

I am sharing all this because on September 1, the Lord spoke to us about a bumper crop of apples, and we knew he was speaking to us about the importance of peace. At the same time, he highlighted Johnny Appleseed, emphasizing the importance of spreading peace. We had no idea why the Lord was highlighting this, but subsequent events have helped us understand. The Senate confirmation hearings for Judge Kavanaugh, which began on September 4th, have released discord, hatred, and fear at astonishing levels. Peacemakers are most definitely needed.

How have you been doing at maintaining peace during the hearings? And probably even more important, have you been a Johnny Appleseed, fostering peace, or a cultural and spiritual fire bomber, stirring things up wherever you can?

Last weekend I asked my congregation if they were all passing the test of the Kavanaugh hearings. I mentioned that the hearings were a test for God’s people. Would they go along with the general spirit of our culture, and be filled with stress, anger, and opinion? Or had they passed the test by staying in, and fostering, peace?

I explained to them that, in a very real sense, we don’t have to have an opinion about Judge Kavanaugh. We don’t have to judge him. We are not one of the 100 people who have to make a decision about whether Judge Kavanaugh should be confirmed for the Supreme Court. Since I am not required to make a decision, the best course I can plot is one of peace, and helping distressed people step into peace.

This is certainly biblical. I can hear the echoes of the Sermon on the Mount in this, where Jesus said,

If one is honest about it, that passage is a bit frightening. I am not certain I want anyone to be judging me like people have been judging Judge Kavanaugh or Dr. Ford. Based upon our own biases, and our partisan filters, it is almost impossible to form an impartial decision about the character and motives of either individual. How refreshing that I don’t have to make that decision. I can release mercy to both individuals by refusing to judge either of them. I can refuse to judge when I don’t have to do so, and avoid being judged for it by Almighty God.

Of course, there are one hundred people that have no choice in the matter. For them, the first sentence in the passage quoted above cannot apply. That instruction only applies to situations in which we have no real need to judge. But those one hundred people have been elected by their constituents for this very purpose. They are charged with judging this situation as fairly and impartially as they can. For them, the second sentence of the passage quoted above applies. They will be judged with the same standard of judgment they are using as they make their decisions. I do not envy them their choice, but I do know the measure they use must be as fair as they can make it.

Just to be clear, I am not saying that we, the rest of us who are not part of the one hundred, have no responsibility to make a decision about these confirmation hearings. We certainly will have a responsibility to make a decision about the process of the confirmation hearings, and about the vote that will be taken, but we will not get to exercise that decision-making process until the senators who represent us are up for reelection. When we step into the voting booth at that time, we will judge whether we believe a senator has voted fairly and impartially. Obviously, our vote will not only focus on the hearings, but upon the senator’s service to our country over the previous six years. I always want to be fair in my judgments, but as a voter I am responsible for exercising judgment as I cast my ballot. That is my responsibility, and I will be judged with the same measure I use to measure.

I am also not saying that we don’t have a responsibility to pray and intercede. Every Christian, and every American, should want justice to be done during the confirmation hearings. As a Christian, I know the standard that I must use when those in positions of authority are accused. The apostle Paul stated, “Do not believe an accusation against a leader, except upon the testimony of two or three witnesses” (1 Timothy 5:19). That is exactly the same standard that should be used whenever anyone is accused, but Paul applies it specifically to leaders so that we will not miss his point. Just because one is called to be an elder, or a leader of any type, doesn’t mean that normal laws of evidence don’t apply. When leaders are accused, we must still use the same standards of evidence as everyone else. I have heard loud voices raised saying the very accusation should be enough to end Judge Kavanaugh’s path to the Supreme Court. While that may be appealing to some, it is not the godly path. Laws of evidence don’t change simply because of the position to which one aspires. Because of this, my prayers have been that justice be done, and that proper and fair processes are followed. I have prayed that the innocent would be protected and exonerated, and those who are not would be exposed. I believe I can pray effectively in that manner without focusing on the individuals or personalities involved.

I do not believe we enhance peace when we refuse to grant justice. I don’t believe we release peace when we argue vehemently about things that we have no responsibility towards. I do believe that when times are fractious, God’s people must uphold biblical standards, and remind people to stay in peace, and foster peace. I believe that is why the Lord turned my attention to peace on September 1. Please join me in this effort. We need many spiritual Johnny Appleseeds who live in peace, and foster peace. In this way, we can meet the discord in our culture, and help bring people together.

3 thoughts on “Apples of Peace: The Kavanaugh Hearings”

A Translation of 1 Thessalonians 5

A Translation of 1 Thessalonians 4

Apples of Peace: The Kavanaugh Hearings

Dust in the Wind: The Hurricane Season

A Translation of 1 Thessalonians 3