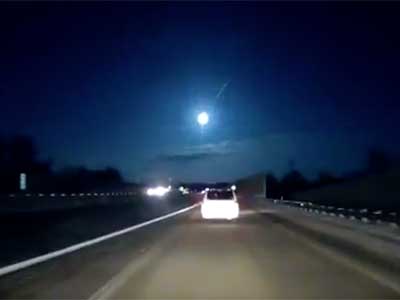 At 8:08 PM on January 16th, a meteor suddenly appeared over Michigan, and exploded, causing a seismic impact that registered 2.0 on the seismic meters (this was not technically an earthquake, because it was caused by a sound wave).

Obviously, the problem with such signs is that without some sort of divine manuscript, we have no idea what they mean. For this reason, we usually treat most such events as just interesting circumstances, and watch the videos of them with the same fascination everyone else does, without attempting to discern a deeper meaning.

But that doesn’t always work for those of us who lean toward the mystic side of life (and that is an apt description of those 584 million Christians who lean into the gifts and power of the Holy Spirit). So-called “Charismatic Christians” expect the Lord to give indications of his will on the earth in the same ways that the scriptures reveal he has always done.

And that’s why I’m writing about this particular event in the heavens. Those who have read my page for longer periods of time know well that I take certain dreams and visions seriously. That means I engage with them at some level. However, because I have studied such topics for over three decades, and have also researched in areas of the subconscious, I understand that not all such things are from God. But there are some dreams that are most certainly from the Lord, and those dreams usually authenticate themselves in some obvious way.

Let me share one easy example. On November 10th of 2004, I woke from a dream in which I was told that the people of Cuba would experience a positive economic change in seven years. The oddest part of the dream is that I was also told that it would occur at the time that $8.00 invested in a U.S. Savings bond would be worth $10.00. I don’t know about you, but to me that was strange, especially since I had never invested in a U.S. Savings bond, and certainly did not know the interest rate at the time.

One of the first things I ask when I have a vivid, memorable dream is, “What is going on in my life that would express itself through my subconscious in a dream of this sort?” I realize that the subconscious mind is always at work, and often expresses itself in dreams. However, there wasn’t any real reason I would have such a dream. The dream does not involve my personal or family well-being, and this topic is not something I was studying or contemplating at the time.

Since I couldn’t come up with any real reason I would have such a dream, I did what any good seeker would do. While I was having coffee later in the morning, I checked what the interest rate was on a U.S. Savings bond. Then I calculated how long it would take $8 invested on November 10th, 2004 to be worth $10. I found out that at that time the interest rate on U.S. Savings bonds was 3.25%. I then pulled out my trusty calculator, and figured the annual interest on $8.00, of course adding the interest each year before calculating the next year’s interest. My calculation for the next years (later verified in Quicken) showed the following: Year one interest was 26¢, year two was 27¢, year three was 28¢, year four was 29¢, year five was 29¢, year six was 30¢, and year seven was 31¢. If you add those numbers (a total of $2 exactly) to the original eight dollars, you get $10 at the end of the seventh year from November 10th, 2004.

Do you see what I mean about the authentication? With a little bit of imagination, I could postulate that I must have come across an article about Cuba’s economy, or perhaps overheard a conversation about it that I had forgotten. However, I can’t imagine how my subconscious could have come up with the formula in the second part of the dream. I couldn’t begin to figure out the answer to the formula until I received information from an outside source about what the interest rate on a U.S. Savings Bond was at that time. It was only obvious after I figured out the equation that the second part of the dream was saying the same as the first part, that there would be a positive change to Cuba’s economy in seven years. Because of these oddities, I strongly suspected the dream was from the Lord, and that he was trying to communicate about something that would happen seven years in Cuba’s future.*

Was the dream accurate? I have no doubts. On November 10th, 2011, at exactly the end of seven years from when I had the dream, a law took effect in Cuba which allowed Cubans to own private property for the first time in fifty years. This very positive economic change shifted the entire economy of Cuba away from its communist roots. This is an obvious fulfillment of the dream, and takes it from the realm of high probability that the Lord was communicating, over the threshold of reasonable doubt to an obvious example of a time the Lord communicated.

That was a rather extended illustration, but it was necessary so that we understand the field on which we are standing. People who consign all dreams to the realms of the subconscious mind have not done their homework. There is far more to this field of study than most people understand.

With all of that as background, lets address the signs in the heaven and on the earth of last week. I believe that there is a high probability that the Lord did provide a bit of a manuscript for what it means back on October 7th of last year. On that day, my wife, Dawn, had an experience in which she was told to watch what happened on January 16th. In another experience we were also told to watch Michigan, and that there would be a sign in the heavens that the veil between God’s realm and the earth was being opened.

The nice thing about experiences like this is that you simply have to wait and watch and let events either authenticate or falsify the dream. We knew that if these things were from the Lord, something obvious would happen on January 16th that would help us understand. A spectacular meteor strike, caught on video and shared virally around the world, most certainly fulfills the requirements of a sign in the heavens. The fact that it happened over Michigan, and happened on January 16th ticks those checkboxes in a way that makes me believe the Lord really was communicating something. It would be an incredible lack of faith to simply label these things as coincidences.

As a result, it appears that we actually do have an informal manuscript, a bit of a roadmap to last week’s “sign in the heavens,” based upon what we received earlier. It certainly isn’t Scripture,** but I am confident that the meteor fits the biblical description of a “sign in the heavens” for all the reasons stated above. What was it a sign of? The signs were intended to point to one thing; the veil that exists between God’s realm and our realm is opening.

I know. Some of you may be a bit let down. It seems that if God went through all the trouble of sending a perfectly good meteor to blow up over Michigan as a sign, that there should be more associated with it. Well, it is actually a lot of information if you look more closely. At Jesus’ baptism, we are told,

After Jesus was baptized, he immediately came up out of the water. Incredibly, the heavens opened for him, and he saw the Spirit of God descending in the form of a dove and land upon him. (Matthew 3:16)

When Jesus was about to embark on a ministry of presence and power, the veil between heaven and earth opened, the Spirit and power poured forth, and everything changed.

I think you would agree that if that same sort of miracle working power were again being poured forth on the earth, it would be worth a sign in the heavens. That is specifically what I believe the Lord intended to communicate on January 16th. Of course, time will tell. If we begin to see more power available to the people of God in answer to their prayers, if we see an uptick in miracles, and even more signs and wonders, we will know that this sign is being validated. In the meantime, it is an encouragement to keep pressing in to the Lord with prayers, petitions, and intercessions. Let’s see what God is up to.

* Because of the high probability that the Cuba dream was actually inside information from the Lord intended to encourage the Cuban people with whom I had contact, I shared the dream and its meaning in many different venues, and even wrote about it. You can read what I wrote on February 26th, 2011, eight months before the law was enacted HERE. You can also read what I wrote about it on November 10th, 2011 HERE.

** Please note that dreams and visions can never contradict the clear words of Scripture. If they do, that is a certain sign that they are not from the Lord. However, they can give us great encouragement about the things God is doing on behalf of his people.